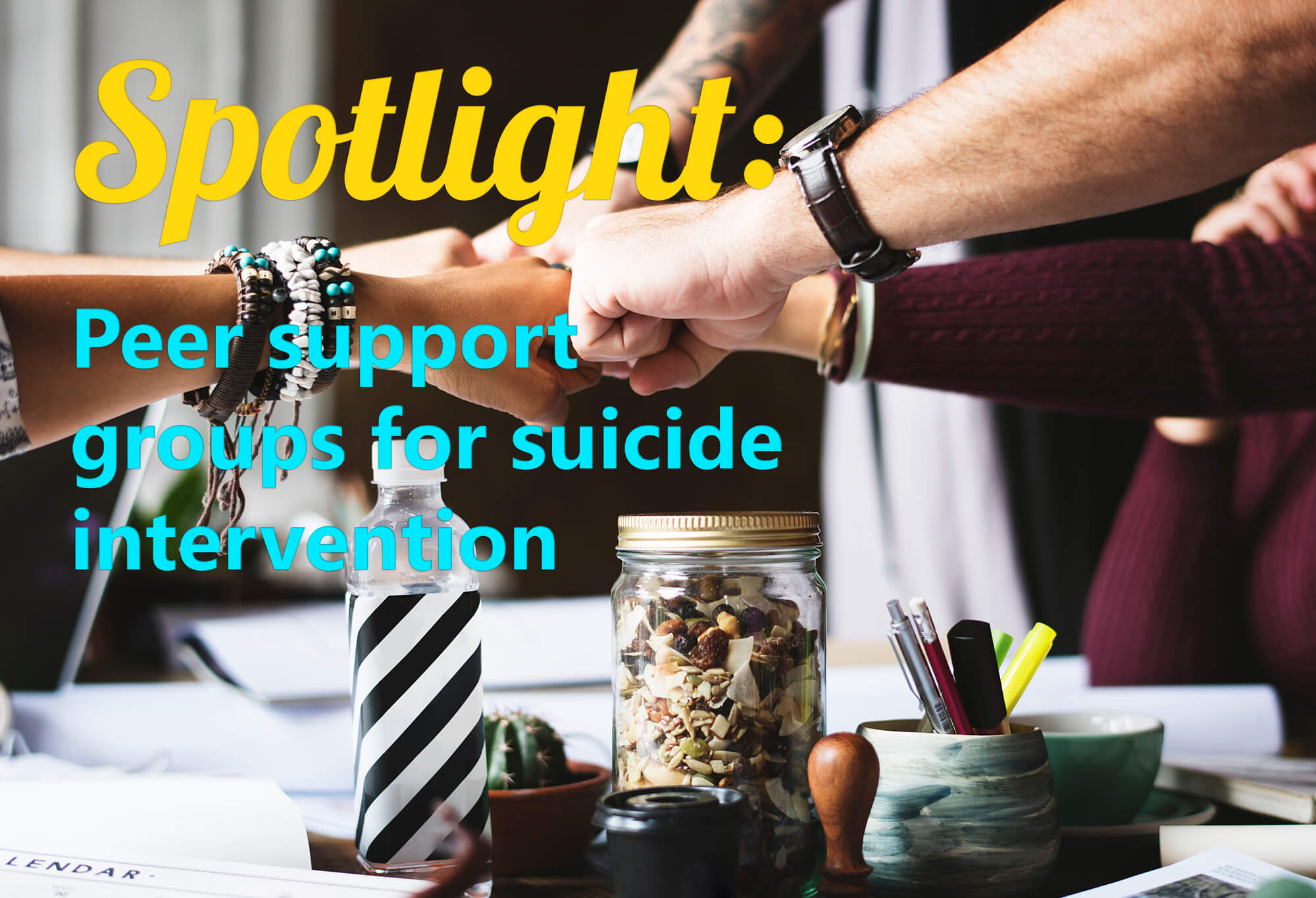 The Skills for Safer Living program is a combination of a twenty-week skills-based group and a peer support group for individuals with recurring thoughts and behaviors about suicide. The group process and content has been derived from innovative work that has developed over the last ten years at St. Michael’s Hospital in Toronto. The Skills for Safer Living Group itself runs for twenty weeks and provides group participants the opportunity to develop specific strategies and skills to identify, interrupt, and change their behavior about suicide. CICMH chatted with Dwight Syms and Keeley Phillips from CMHA Waterloo Wellington and Yvonne Bergmans from St Michael’s hospital about the program.

CICMH: Tell us about the Skills for Safer Living program.

Yvonne: It’s a program that was created in 1993 in Toronto for people with recurrent suicide attempts. It’s about creating the possibility of living life safely. The program is based on the Emotional Literacy framework. Behavior is seen to be a communicator of the distressed psyche. So we work toward understanding the psyche or the emotions that are and experienced by clients in their bodies and manifest through their behavior. We work on skills to keep oneself as safe as possible while coming to a different understanding that thoughts of suicide don’t mean that you need to end your life; It’s an early warning sign that something is amiss.

We think about how to reframe and try to understand the feelings that we’re experiencing. We also try identify what is it that people are trying to end, because it might not be ending life –  but instead ending the feeling of like this all the time, or the sense that this is never going away. So we begin to identify a better understanding of what safety looks like, sounds like and feels like. We think about who are the people that you can go to and how to ask for help. We talk about emotional literacy and understanding the role and function of an emotion as part of the human experience – that a thought or a feeling won’t kill a person. We talk about different ways of problem solving and managing relationships. Sometimes what that means is that you have to reach out and find people who might be able to help.

CICMH: When this program first started, it wasn’t specifically geared toward youth. How did the partnership with the local postsecondary institutions start?

Yvonne: It was a general program when it started – it was for anyone 16 and over. Because I worked in a general hospital setting, we tended not to get a lot of 16-18 year olds. However we did have a lot of college-aged students. It was the folks at CMHA Waterloo Wellington who worked with Wilfred Laurier University and the nearby postsecondary institutions who started working toward doing something about the incidents of students attempting suicide on campus. We also have a collaboration with CMHA Simcoe County and Georgian College.

Keeley: It was identified that university students were a group that would be able to fully benefit from the group as most of them were able to connect with people who were at a similar age cohort. We  talked to the University of Waterloo and Wilfred Laurier University and were able to have Laurier give us the space on campus to run the group. So the space is provided by Laurier and there is work being done to ensure that all postsocondary students are aware of the group and staff are referring individuals to the group.

CICMH: Would you say that it is fairly integrated with other campus students services?

Dwight: Right now we’re just utilizing the space but we do have campus counselors who refer students to the program.

Keeley: It depends. More so at Wilfred Laurier University than any place else, at this point. Very often we have people come to the group after their postsecondary education has already been interrupted and they are no longer matriculated at their schools.

Yvonne: An interesting thing that we found at Georgian College – which was a collaboration with the CMHA Simcoe County – was that the students didn’t come to the group. It was more student-aged folk, and we wonder how much that has to do with stigma and shame in identifying with mental illness or suicide.

CICMH: What are your thoughts on this phenomenon of  students only joining the program after they leave school?

Yvonne: We’d definitely like to get them when they’re fresh. So they can stay in school and be supported, as opposed to coming only when they leave and their narrative has been interrupted.

CICMH: I’ve heard really good things about the program in terms of success stories and remission. Why do you think the program has been so effective?

Dwight: I think one of the things is that because it’s run by peers, it’s very intentional. There’s a lot of conversation around support and the delivery of the program. Yvonne has also been tremendous in providing weekly Ontario Telemedicine Network (OTN) consultations regarding the running of our various groups. Yvonne and I talk on a weekly basis to make sure that we’re on track in terms of the delivery of the program, because there’s always the risk that people will drift from the core of the program. We want to make sure that we adjust for that as quickly as possible. It’s not to say that we’re rigid but we do want people to go through the program with integrity.

Yvonne: The level of support that the program needs to run is probably more than you’d see with a regular psychotherapeutic intervention. I think that’s something that we’ve been very careful about paying attention to. It’s not a group that talks about suicide, but as the facilitator of the program there’s always some stress around the fact that there are people in the group who have tried to end their lives in the past. It takes a lot of careful attention in terms of how we ensure that our staff are having the support that they need in order to do the job well.

CICMH: Are there any concerns about burnout or vicarious trauma?

Yvonne: Always. We have a lot of group guidelines in place around ensuring that the content of the group is coming from a fairly trauma-informed lens. But it is a taxing job. It is why we offer as much supervision and support as we can. For my peer workers, and I’m sure it’s the same for Dwight and Keeley’s team, if someone has a worry or fear then we’d want to hear about it sooner rather than later. We also require that group participants have a counselor or spiritual director – somebody whom they can go to to speak on an individual level.

Keeley: Another thing that contributed to the success of the program is defining the scope of the group and limiting in to a 90-minute a week intervention. So as Yvonne said, the fact that participants have another form of individual support means that our staff are not the only person supporting someone. We also try to make sure that there’s really clear boundaries.

Dwight: I think it’s also the fact that the various skills laid out in the program have a practical application to helping people build space between stimulus and response.

Keeley: It’s also the peer-led aspect. So many times, we get feedback from our participants saying that the group was impactful because the facilitator has lived experience. They know that the facilitator is using those skills in their recovery.

CICMH: Are the effects of the program sustainable? Have you had people complete the program and leave, then you conduct follow-ups to see how they’re doing?

Dwight: Yes. Sometimes we hire them. We definitely have a cases where someone went through the program and later came back to be a facilitator and deliver the program.

Yvonne: In Toronto too, I have peer facilitators who are graduates of the program. They’ve been through the program and come back to co-facilitate with the team. Sometimes, if something comes through like a CBC interview or a documentary request, I do send it out to anyone who has given me permission to contact them. So our graduates have participated in all kinds of different studies and documentaries. I think that when our group participants know that we’re still here and that we want to hear from them, they tend to get in touch.

Keeley: We have many participants who stay involved with our regular peer support services after the group has dispersed. We also offer follow-up groups and people are welcome to come to weekly groups as long as they want to after the end of the program.

At CICMH, we’d like to thank Dwight Syms, Keeley Phillips and Yvonne Bergmans for their time.

For our readers – to learn more about Skills for Safer Living, head over to their website.