Not by degrees: Improving student mental health in the UK’s universities

Not by degrees: Improving student mental health in the UK’s universities is a report by the Institute for Public Policy Research. This report is an interesting insight into the state of postsecondary student mental health in the UK. The report explores levels of mental illness, mental distress and low wellbeing among the wider population of young adults in the UK – who make up the majority of the student population – and how they have changed over time , before turning to consider the same questions in respect of students, in particular. It then sets out the factors which are likely to have driven changes to prevalence rates and demand for mental health services among students and the extent to which these are associated with the student experience. The report then turns to consider the strategies that universities are implementing in order to meet the challenge. It explores how services are configured across the sector and how far levels of demand, before focusing on the two key elements of a ‘whole-university approach’ to mental health and wellbeing – prevention and promotion and access to support, care and treatment. The final chapter of the report sets out a number of recommendations – targeted at universities, government and the NHS – for improving the mental health and wellbeing of students, and ensuring that all those who require support, care or treatment are able to access it.

Levels of mental illness, mental distress and low wellbeing among students in higher education in the UK are increasing, and are high relative to other sections of the population. Around three-quarters of adults with a mental illness first experience symptoms before the age of 25. As the student population comes to more closely reflect the UK’s wider socioeconomic and demographic make-up, a growing proportion of students are affected by mental illness. Over the past 10 years there has been a fivefold increase in the proportion of students who disclose a mental health condition to their university. Students can be at added risk of experiencing poorer mental health and wellbeing, due to factors relating to academic, financial and social pressures. This is evident in the high levels of mental distress reported by students, and the extent to which universities have experienced dramatic increases in the number of students seeking counselling support.

Mental health conditions account for an increasing proportion of all disability disclosed by first-year students (17 per cent in 2015/16, compared to 5 per cent in 2006/07).

Poor mental health and wellbeing can affect students’ academic performance and desire to remain in higher education (HE). In the most severe and tragic circumstances, it can contribute to death by suicide – levels of which have also increased among students in recent years. The HE sector and government both have an interest in helping to improve the mental health and wellbeing of students. Universities should make the issue a strategic priority, as there is currently too much variation in how well equipped universities are to meet this challenge.

The full version of the Not by degrees is available here. 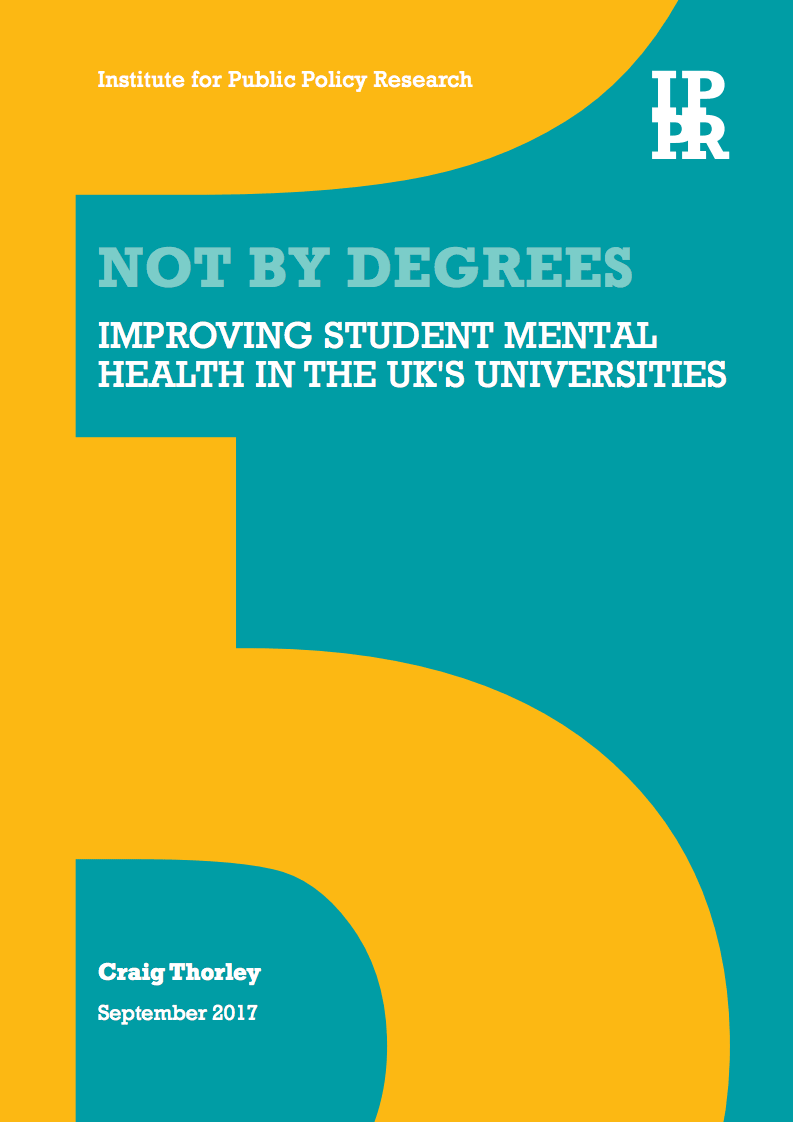 Read Full Report by the Institute for Public Policy Research