International enrolment increases by 10% in Canada

Key source countries are China, India, South Korea, France and Saudi Arabia, followed by the US and Brazil.

Overall, Chinese students account for 33% of the international student population. Nigeria and Vietnam are the fastest rising markets in terms of source countries.

Canada’s encouraging policy settings around routes to post-study work and permanent residency continue to be a strong draw: the number of international students transitioning directly to permanent residency in Canada grew for the first time in six years last year, up 11% on 2013 to 9,330. 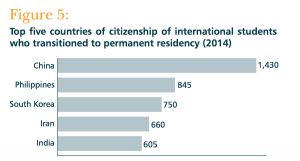 The top five nationalities most likely to transition to PR include China, South Korea and India, but also Iran and the Philippines.

And CBIE’s International Student Survey, which also informs the report, A World of Learning, reveals that just over half of 4,000 students surveyed said they intend to apply for permanent residence at the end of their studies.

“International education is critical to the future of Canada and Canadians,” said Karen McBride, president and CEO of CBIE. “We are pleased to provide policymakers, thought leaders and innovators in education, government and business with a valuable resource to advance our collective understanding and lend further impetus to our initiatives.”

The study shows that nearly a third (30%) of international undergraduates entering Canadian universities annually are enrolled from pathway programmes.

McBride noted that “Canada’s coordination of pathway programmes for international students is not well developed compared to other global destinations”.

“International education is critical to the future of Canada and Canadians”

In particular, she highlighted the contrast with Australia, where up to 80% of international undergraduates arrive through a “well-defined” pathway programme.

In light of these increasing pressures, ICG, which has some research presented as part of  has prompted Canadian post-secondary institutions to consider whether their own pathways will be able to meet growing demand, whether they could benefit from public-private partnerships, and how pathways can be streamlined.

CBIE’s International Student Survey, which informs the report, A World of Learning, also provides evidence that international students benefit from a grounding in a Canadian high school.

For example, its survey of some 4,000 students found that those who came to their current studies after attending a Canadian high school were more likely (66%) to have Canadian friends than those who had not (46%).

“Canada has already come so far in terms of consistently increasing the number of international students we host annually and ensuring they have a great experience,” McBride told The PIE News.