The NCAA Sport Science Institute and the National Association of Student Personnel Administrators (NASPA) launched 360 Proof, a new online tool designed to help members better address alcohol use and abuse on their campuses and to encourage collaboration between athletics departments and student affairs personnel.

NCAA substance abuse survey data has shown that, for the last decade, Division III athletes have consistently consumed alcohol at higher rates than their peers and that nearly one-fifth of all male NCAA athletes have recently had more than 10 drinks in one sitting. 360 Proof was created to help curtail figures like those.

“It offers a high-quality, custom resource to Division III schools to deal with one of the most pressing well-being issues on a college campus – alcohol use – where student-athletes tend to be a high-risk group,” said Leah Kareti, who oversees the project for the NCAA. “It provides tangible tools to integrate athletics into the campus community – first with student-affairs and also to other campus units concerned with student safety and well-being.”

The program, which can be accessed online and used for free by Division III and NASPA Small Colleges and Universities Division members, is composed of three primary tools: a self-study that allows members to take stock of what alcohol use data is already being collected or could be collected on their campuses; deterrence strategies from the National Institute of Alcohol Abuse and Alcoholism; and the Personalized Feedback Index, a confidential online tool for students designed to help them consider the impact of their alcohol use.

The format was developed by a team of alcohol abuse prevention experts in conjunction with student-affairs and athletics professionals.

Nearly 200 institutions have already signed up for the service and, thus far, the feedback has been largely positive. Michelle Walsh, associate director of athletics at the State University of New York at Geneseo said that she found the personalized feedback tool for students to be the most effective part of the program. Now, all first-year athletes at the school are required to take the survey and to take part in group discussions with a counselor on campus.

360 Proof program administrators on campuses have access to an interactive checklist that guides them through the protocols they should implement, and both videos and print materials are available for administrators and coaches. Additionally, users have access to one-on-one help from experts in the field and are provided a forum to discuss the most effective ways to use 360 Proof with peers on other campuses who are also relying on the service. 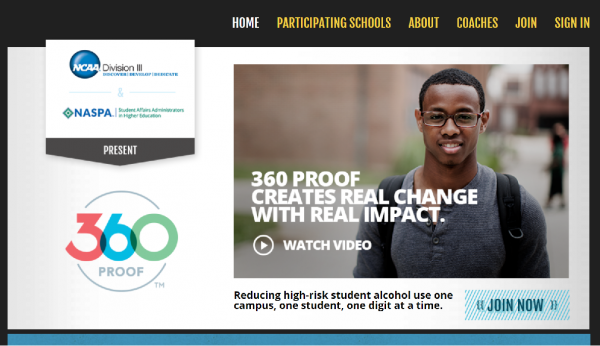