Existing laws and measures to regulate many psychoactive substances were developed in the 20th century; these laws were developed based on fear, racism, political and moral perspectives, and existing knowledge at the time.[1]Canadian Public Health Association. (2014). Canadian Public Health Association discussion paper. A new approach to managing illegal psychoactive substances in Canada. Retrieved from here. But evidence shows that the criminalization of cannabis has not stopped people from using it.[2]Centre for Addiction and Mental Health. (2014). CAMH cannabis policy framework. Retrieved from: https://www.camh.ca/en/camh-news-and-stories/camhs-cannabis-policy-framework-legalization-with-regulation

In Canada — where production, distribution, sale, and possession of cannabis was against the law up until 2018 — more people use this substance than in countries that embrace a less stringent approach.[3]Centre for Addiction and Mental Health. (2014). CAMH cannabis policy framework. Retrieved from: https://www.camh.ca/en/camh-news-and-stories/camhs-cannabis-policy-framework-legalization-with-regulation In effect, these laws have actually increased associated social harms. For example:

Figure 2 presents a model for cannabis policies and their effects on physical and social well-being. In this model, legalization of cannabis without regulation results in increased commercial markets, which contribute to increased health and social harms. In Colorado and Washington, where cannabis is legalized, there was growth in the cannabis edibles market. In Colorado, the edibles market expanded because of lack of regulation for edibles, and edibles appealed to those who did not want to smoke. This resulted in unintentional overconsumption and overdose.[5]The Task Force on Cannabis Legalization and Regulation. (2016). A framework for the legalization and regulation of cannabis in Canada. The final report of the task force on cannabis legalization and regulation. Retrieved from: https://www.canada.ca/en/services/health/marijuana-cannabis/task-force-marijuana-legalization-regulation/framework-legalization-regulation-cannabis-in-canada.html On the other end of the curve, total prohibition results in an unregulated criminal market, which also results in increased health and social harms.

In the middle of the curve is legalization with strict regulation, which is associated with fewer social and health harms. Within this type of regulatory framework, a public health approach can be used to reduce cannabis-related risks and harms to the whole population, including targeted interventions for high-risk groups.

Figure 2: Cannabis policies and social/health harm: A conceptual model. Adapted with permission from Apfel.[6]Apfel. F. (2014). Cannabis: from prohibition to regulation. When the music changes so does the dance. AR Policy Brief 5. Barcelona: ALICE RAP (Addictions and Lifestyles in Contemporary Europe – Reframing Addictions Policy). Retrieved from: http://www.aie.nl/wp-content/uploads/2014/05/AR-Policy-Paper-5.pdf 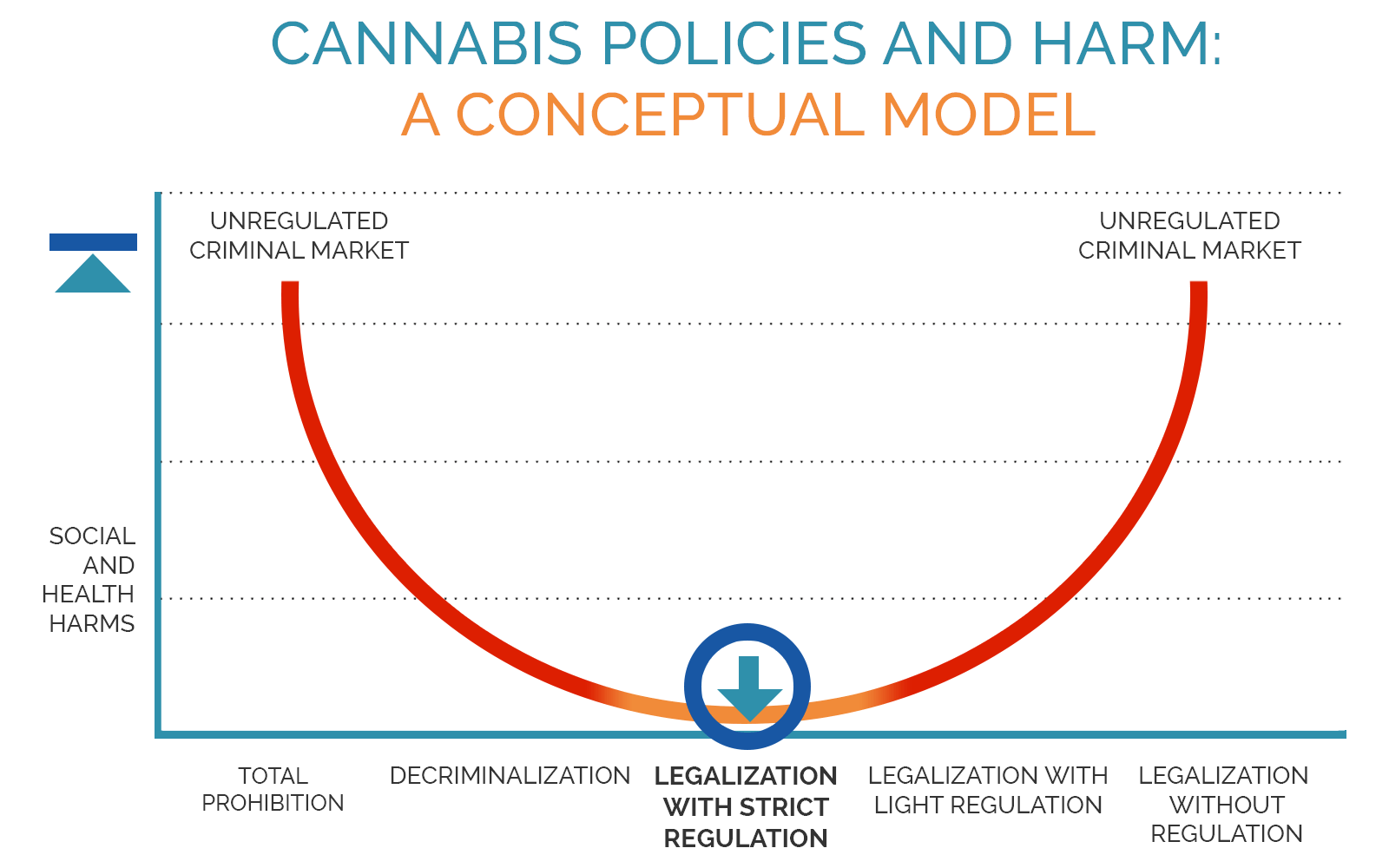