“Intersectionality is a lens through which you can see where power comes and collides, where it interlocks and intersects.” – Kimberlé Crenshaw

This section of the toolkit will look at how the social determinants of health are impacted by the unique experiences of the multiply marginalized identities under the larger 2SLGBTQ+ umbrella.

“Colonialism is a process with a long history, and mental health services and values in Canada have been informed by the colonial foundations of the nation (Nelson, 2012)”

The legacy of colonialism and the colonization of Indigenous peoples in Canada cannot be ignored as a deeply rooted contributor to the mental health of Indigenous people today (Nelson, 2012; Lavallee & Poole, 2009) and has been acknowledged by some as the source of a collective form of historical trauma and Post-Traumatic Stress Disorder (PTSD) (Robertson, 2015). It is important to acknowledge the harmful impact of continued oppression and societal inequities on the social determinants of Indigenous health, and how they can in turn create more challenges and barriers to other health determinants (Nelson, 2012). Indigenous respondents to a 2019 Statistics Canada survey on sexual orientation and mental health reported significantly lower odds of complete mental health when compared to white Canadians in unadjusted models (Gilmour, 2019). 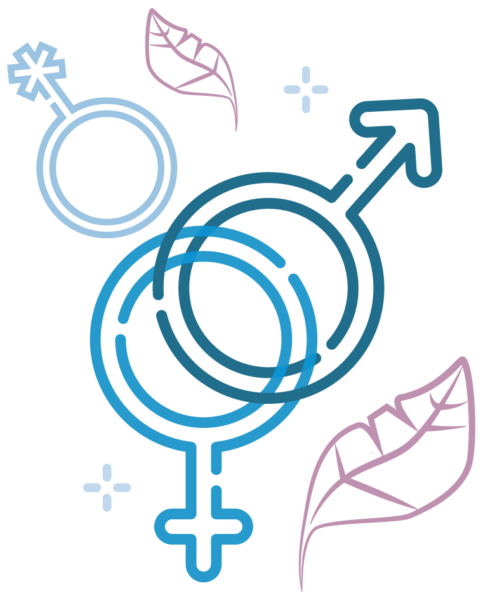 The colonial history of mental health contributes not only to inequity in perceptions and understandings of the mental health of Indigenous peoples (Nelson, 2012), but has also framed and “explained” queer Indigenous identities in ways that were neither applicable nor accurate to the many cultural expressions of Indigenous gender and sexual fluidity.

The term Two-Spirit (alternatively styled as 2-Spirit or 2S), was proposed by Myra Laramee in 1990 at the Third Annual Intertribal Native American, First Nations, Gay and Lesbian American Conference. The term is derived from the Anisnaabemowin term niizh manidoowag meaning two spirits (Filice, 2018; Fewster, 2018), and adopted as a self-identifying term, and replacement for offensive colonial terms previously used to define queer and gender non-conforming Indigenous people (O’brien, 2009). Though the term is often used by some Indigenous folks to represent their identity, whether spiritual, sexual and/or gender (Filice, 2018; Rainbow Health Ontario, 2016), it is important to note that definitions of Two-Spirit can vary from nation to nation, and the term is not used by all queer Indigenous people to identify themselves (Rainbow Health Ontario, 2016). Many queer Indigenous people can and do identify with other queer identities, in addition to, or instead of Two-Spirit.

The Alberta Civil Liberties Research Centre (2021) expands on their definition of the process of anti-racism, highlighting that it involves addressing the structures (both individual and structural) that uphold the power imbalances informed by racism and racial prejudice. Though the majority of Canadians of all ages agree that racism is a serious problem (Bricker, 2020), a 2020 IPSOS poll showed that 40% of Canadians view racism as an American issue (Bricker, 2020; Burke et al., 2021).

Though Canadian society emphasizes our multiculturalism, systemic racism and discrimination continue to negatively impact the lives of racialized individuals (Cotter, 2022). In his article for Statistics Canada, Cotter (2022) acknowledges the pervasive nature of racial discrimination and race-based violence, and its ability to not only impact the individual experiencing racism but also to impacts the wider communities they belong to as well.

Appreciating the intersections of identities is done by acknowledging that humans experience the world through the perspectives of those multiple identities fully and simultaneously. This allows for a deeper appreciation of the nuances of racialized experiences – there is no universal experience. Working to dismantle the narratives that unfairly conflate the experiences of all racialized people is integral to forming a better understanding of those experiences (Whitfield et al., 2014; Burke et al., 2021; Lawson, 2020; Gajaria et al., 2021).

A 2016 report by the Mental Health Commission of Canada showed that 20% of the population identified as a member of a racialized group, the majority of whom identified as South Asian (Mckenzie et al., 2016). But despite the increase in population, there continues to be evidence of increased negative mental and physical health outcomes among racialized individuals (Mckenzie et al., 2016), which some argue may be due in part to discrimination and racism imbedded in health care systems (Whitfield et al., 2014). Exposure to stressors like cultural expectations and racism are among some of the factors that can negatively impact the mental health of racialized queer people, and dismissive responses from people in support roles can result in less help-seeking actions to address their mental health challenges (Whitfield et al., 2014; Mckenzie et al., 2016; Gajaria et al., 2021).

When looking at the intersectional experiences of racialized queer people, research has shown that queer people of colour carry multiple marginalized identities, and often experience racism in queer communities, and queerphobia in racialized communities (Veldhuis, 2022; Whitfield et al., 2014). Though LGBTQ+ Canadians (19-40%) are more likely than heterosexual Canadians (11%) to be diagnosed with mood or anxiety disorders (Government of Canada, 2019; Woodford et al., 2019), these statistics don’t speak to the differences in prevalence of mental health challenges that exists between various racialized queer individuals and their white peers.

The percentages provided are from Statistics Canada which limited their data to Lesbians, Gay Men, and Bisexual men and women. People who could not categorize themselves into these identities were excluded from the research.

When looking at the mental health and experiences of racialized people and those of wider queer communities, the challenges that exist in the intersection of racial identity and queer identity become clearer. Addressing these barriers and challenges involves examining the role that mental health supports play in perpetuating racism, racial prejudices, and biases that adversely impact perceptions of safety in seeking care. Addressing issues of representation in mental health supports can help build trust among racialized queer students seeking support by including professionals who are more likely to empathize with or relate to their experiences (Mental Health Commission of Canada, 2021).

When looking into the intersections of queer identities, it is important not to replicate patterns that downplay the impact of disability. Much like the quote above notes, queer people are often navigating multiple challenges simultaneously, and additional factors like manifestation of disability, visibility/ invisibility of disability, and other identity markers will all have an impact on how these intersections are navigated.

A few studies have investigated external perceptions of disability and mental health and the ways that it impacts the lives of post-secondary students. In 2015, Gonzales et al. identified 5 themes in the types of dismissive and aggressive behaviours experienced by people with mental health challenges. These included invalidation and patronizing behaviours, assumptions of inferiority and a lack of agency, fear that mental illness makes the person dangerous, shaming, and second-class citizenship (Miller & Smith, 2020). Through their research, they were able to identify additional themes, some of which overlap with the noted experiences of the participants in Miller and Smith’s study, and some that were uniquely reported by their participants. The unique domains were denial of identity, denial of privacy, helplessness, and desexualization (Miller & Smith, 2020).

The intersections of 2SLGBTQ+ identity and disability present another area of overlap where experiences of oppression, and societal and structural barriers can become exacerbated. Participants in Miller and Smith’s (2020) study noted that a lack of visibility of their disabilities and the privileges afforded to them by some of their other identities were able to protect them from certain experiences of discrimination on campus.

“It is revolutionary for any trans person to choose to be seen and visible in a world that tells us we should not exist.” — Laverne Cox

According to Statistics Canada (2022), Ontario is home to roughly 39% of Canada’s trans* population, though some advocates argue that the actual number may be higher due to the reluctance of some to disclose, and some reports of aversion to the phrasing and collection method (Spectrum & Wisdom2Action, 2021; Statistics Canada, 2022). Much progress has been made to affirm the rights and safety of trans* people in Canadian law, but it is important to acknowledge the barriers and violence trans* people continue to face, and how that impacts the mental health and well-being of these communities.

Post-secondary campuses have the potential to act as mitigators or barriers to the mental health and well-being of trans* students (Goldberg, 2018; Laidlaw, 2020). Though instances of interpersonal conflict (isolation, bullying, harassment, etc.) contribute greatly to negative mental health outcomes for trans* students on campus (Taylor et al., 2020), so can structural barriers (Goldberg, 2018) that uphold cisnormativity and reinforce anti-trans* stigmas.

*For information on why we use the asterisk, see the glossary entry here

Stigma and anti-trans* sentiment have a long history on post-secondary campuses, and though there is a requirement for institutions to comply with anti-discrimination laws, many trans* students choose not to utilize certain campus resources, participate in activities, or access services due to fear of violence, discomfort, or discrimination (Laidlaw, 2020; Spectrum & Wisdom2Action, 2021).

Studies have shown that “gender policing” continues to be an overt form of discrimination, that sees trans* students denied access to bathrooms, gym locker rooms and, in some cases, appropriate student housing (Laidlaw, 2020; Goldberg, 2018). The frequency of anti-trans microaggressions was linked to negative academic outcomes, and denial of access to gender-affirming-spaces such as bathrooms, locker rooms, and housing was associated with higher risks of suicidality among trans* post-secondary students (Goldberg, 2018).

There is evidence that suggests that trans* people are one of the most medically underserved populations in Canada, with 48.9% of respondents in a study of trans* healthcare in Ontario reporting having had at least one unmet health need the year prior (Giblon & Bauer, 2017). Many health professionals are not knowledgeable of the practices and procedures commonly desired or required to support the physical and mental health of trans* people. Research has shown that many trans* people in Ontario actively avoid seeking medical care due to fear of anti-trans sentiments, denial of healthcare, and medical gatekeeping, which are common barriers faced by trans* people (Giblon & Bauer, 2017; Spectrum & Wisdom2Action, 2021). 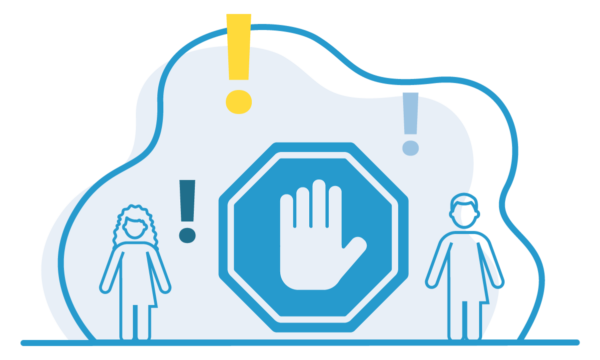 Mental health outcomes are another area in which trans* people experience higher rates of challenges and diagnoses than both their LGBT and heterosexual cis-gender peers (Veale et al., 2017; Taylor et al., 2020; Woodford et al., 2019). Many studies have shown that Trans* students are more likely to report feelings of depression, suicidal ideation, and feelings of overwhelm, as well as being diagnosed with eating disorders than cisgender students (Goldberg, 2018; Woodford et al., 2019; Spectrum & Wisdom2Action, 2021). Much like the other identities highlighted in this section, 2SLGBTQ+ student experiences of discrimination can be exacerbated or mitigated by their other intersecting identities (Woodford et al., 2016; Miller & Smith, 2020), but can also be influenced by the campus climate, lack of support from staff and faculty, and reluctant attitudes towards dismantling transphobic stigmas (Woodford et al., 2016; Goldberg, 2018; Laidlaw, 2020).

Invisible Intersections: A Toolkit on Supporting 2SLGBTQ+ Students on Campus