We sat down with Dr. Elizabeth Cawley, Regional Mental Health Coordinator for the Association of Atlantic Universities on a project that post-secondary institutions can implement that is neither expensive nor arduous.

Inspired by what she saw was taking place in the United States, Dr. Elizabeth Cawley decided to bring the Student ID card initiative  to Atlantic Canada. We are hoping that you may be inspired to implement it at a school here in Ontario as well!

The student identification card initiative puts crisis numbers at the back of a student’s ID Card,  This can remove the guesswork of trying to figure out who to reach out to at a time of crisis and save has the potential to save lives.

Dr.Cawley’s write up stated that, “It is well documented that many students need access to mental health support services outside of standard university operating hours (i.e., 9am to 5pm). It is also when students often need it most that they may not have the time or cognitive capacity (if in crisis) to reach for a reputable number to call after hours.”

Her main tip was that  instead of trying to remove existing student ID cards from circulation to replace them with the new ones, you can start by providing new students with the new ID cards. This makes it an initiative with a high return on investment.

Here is an example of that: 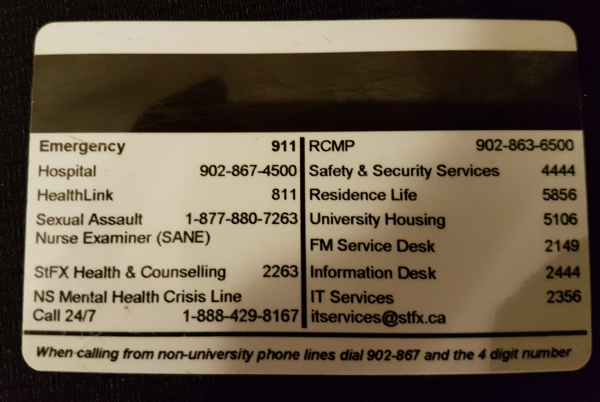 More about the Student ID Campaign:

The Student ID Card Campaign was born out of Active Minds Inc, a national American organization that empowers students to speak openly about mental health in order to educate others and encourage help-seeking. Active Minds created a guide to support campus efforts to have mental health crisis numbers printed on the backs of ID cards. That way all students will have access to immediate help if they need it. The guide includes information on how to decide what crisis numbers to display and much more.

In January 2019, Active Minds, Crisis Text Line, and The National Suicide Prevention Lifeline launched the first campaign to support high schools, colleges, and universities in their efforts to add mental health and suicide prevention crisis numbers to student ID cards. The idea for the project began as early as 2012, when Active Minds students at the University of Dayton successfully petitioned campus administrators to print a crisis call line on the back of all student identification cards. In the last year, legislators in California successfully passed State Senate Bill 972, requiring the addition of crisis numbers to ID cards in schools across the state. California Community Colleges is the largest higher education system in America with 2.1 million students. They are also extremely under resourced, with only one mental health counselor for every 2000 students. In May 2017, they partnered with Crisis Text Line to add this crisis number and have since been receiving over 400 conversations a month from students.