What is the NASPA Ecological Approach?

The US National Association of Student Personnel Administrators (NASPA) ecological model is a well-known systemic model that a number of North American colleges/universities are using to support their work around promoting student mental health.

Using an ecological approach can help campus leaders address health-related issues to achieve a healthy campus that is community-based and not just individually focused. Campus ecology provides a new way to approach student mental health and view the connections among health, learning, and the campus structure. It encourages the exploration of relationships between and among individuals and the learning communities that comprise the campus environment.

NASPA has developed a booklet, which they describe as offering the student affairs practitioner a step-by-step guide for applying the ecological framework in a health assessment or strategic planning process that integrates health across a wide institutional spectrum.

They argue that making campus health a central focus for colleges requires a shift in the philosophy of campus governance, leadership, and action by campus leaders. Using an ecological approach gives student affairs leaders a multifaceted view of the health-related behaviors of students and groups. It offers a unique way to design a strategic planning process that integrates health across a wide institutional spectrum. The NASPA Approach/Model Campus health assessment or strategic planning process involves a Campus committee or group working together to:

The figure below illustrates the four broad kinds of environmental factors that should be considered for each identified health concern or issue: 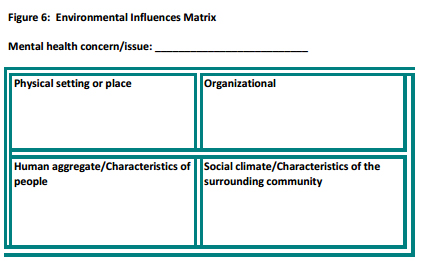 What models exist on Ontario campuses?

No Ontario or Canadian universities or colleges have adopted this model, however, many colleges in the United States have.

This ecological perspective provides a strategic framework that leaders can use to open campus-wide dialogue and stimulate new understanding of how issues relating to health permeate the interrelated dimensions of campus life. So it requires the buy-in and drive by campus leadership to strategic objectives and plans to become healthier communities and more successful in achieving institutional goals.